Do you use TypeScript? Ever wanted to know how to get the return type of a function? How about rolling your own nameof operator?

I've started a GitBook I'm calling TypeScript Cookbook. It's a place for all of my favorite TypeScript recipes, from real-world best practices to esoteric tricks I've picked up along the way. Hot, fresh and guaranteed to please!

It's still very much a work in progress, so please feel free to check it out early and often!

By the way, I'm looking for contributors! If you have any awesome TypeScript recipes to share, please get on GitBook and contribute! The book is fully open source!

GitPitch is a recent discovery of mine. For someone used to writing code in PowerPoint/Keynote, it's very nice - write your slides in Markdown, post to GitHub, and GitPitch will construct a nice looking presentation for you, hosted on their website. The only steps involved are: add a file called PITCHME.md to your GitHub repo, point GitPitch to it, and off you go.

I found GitPitch to be appealing as I rarely do code demos except in very controlled circumstances, so my slides are extremely code-heavy. I don't know if you know this, but writing code directly in PowerPoint or Keynote sucks. Everything wants to help you with autocorrect or by formatting my punctuation. Plus I have to do all code highlighting myself, and I think proper code highlighting is essential to getting your point across when you're presenting any kind of code.

I did a talk at Chicago Code Camp on TypeScript's type system. I had written an outline for it before my trip and planned to write the slides on the train ride up. Originally, I was going to use Ken Wheeler's Spectacle, but I gave GitPitch a shot since I already knew Markdown and had a lot of slides to write. (You can see the final result here - the repo with the presentation markdown is here.)

Without further ado, here's my brief review on both.

Both are awesome presentation choices that solve similar problems. I personally will probably use GitPitch more frequently for not-code-heavy presentations - it's very easy to make really nice looking presentations. That said, I will likely convert my TypeScript types talk to Spectacle for that awesome stepping-thru-code thing when I give that talk again at Detroit.Code() and Kansas City Developer Conference.

Are you using String.Length to compute the length of a string that might include emojis?

If you compute String.Length for such a string, you may not get back exactly what you expect:

This will write 12 to the screen. What were YOU expecting? 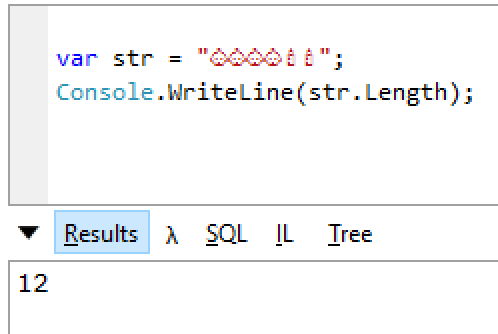 This happens because C# strings are UTF-16 by default and Unicode characters that fall outside of these 16-bit lengths are stored as surrogate pairs, or two chars that represent one 32-bit character.

However, you may be wanting the number of Unicode characters, not the actual length of the char array, in which case you should use System.Globalization.StringInfo to compute the length of your strings. Like so:

This will yield what you're looking for:

Want more reading? Check out Joel Spolsky's very excellent article on strings and encoding. Remember, there is NO such thing as plain text!

TL;DR: I've gotten really excited about React as a web framework since starting with Angular and then Angular 2. The combination of JSX + easy-to-understand component model have made React a winner to me.

I've been tweeting a lot recently about React recently. After doing a lot of Angular 2 work for the majority of 2016 including a successful workshop at a few conferences, I started learning React early this year and was instantly hooked. A friend of mine wanted me to show him what all the excitement was about, and, well:

Demo'd #reactjs to an Angular friend. He was converted within 5 minutes.

...which caught the attention of a Twitter friend of mine, Adam Morgan. He asked to see a repo - I said, let's do one better and make a video, which you can find here:

In the video, I walk through the three things that really make React stand out to me over Angular 2, with questions and commentary from Adam. The long and the short of it:

Here are some of the resources I've used to get started.

It was a huge moment of pride in October when I received my Microsoft MVP award. It was as big a moment when I got my acceptance to NDC London to speak on RESTful APIs using ASP.NET ten days later.

I'm thrilled and grateful that another one of my talks was picked up for the 10th NDC Oslo - this time on a maintainable RESTful API architecture using ASP.NET Core. It's really the sequel to the talk I gave at NDC and several other conferences/user groups last year. I'm moving beyond the theoretical and diving into implementation of a API architecture that I think is maintainable for the life of your API.

I wanted to take a moment and thank NDC for giving me a chance to present at not only one but two conferences this year. As far as conferences go, NDC has the whole package - they have a content lineup that is unrivaled and go out of their way to make their attendees and speakers feel loved.

I'm told that NDC takes chances on newer speakers. For taking a chance on this new speaker from my little corner of the Midwest, I'm very grateful. You've created an eternally loyal speaker in me.

This is going to be an exciting year.